How has it taken me until 2017 to try out chalk paint?! It’s a whole new, wonderful discovery for me-albeit 10 years behind most people in the interiors world no doubt. Here is my first foray into the world of Annie Sloan-and at risk of sounding overdramatic- I’m pretty sure it’s changed my life forever!

I salvaged this desk from my local tip-it was sitting on the side in the rain & I gave the tip charity shop £5 for it. There were initials carved into the top & the handles were unremarkable but I lived with it for a year before deciding to paint it blue.

Annie Sloan chalk paint says there’s no need to sand or clean surfaces prior to painting (whaaat? So i just paint it on?) This goes against everything I’ve ever learnt about decorating. Preparation is king. I couldn’t quite believe what I was reading, but who am I to argue- if it cuts out the laborious, unsatisfying bit I’m sold!

After filling the handle holes and the worst of the gouges with wood filler, I slapped the paint on, it dried quickly & the same night I gave it a coat of wax. In front of an episode of Kirstie & Phil. I ordered a pair of copper cup handles from ebay & was so chuffed with the result! 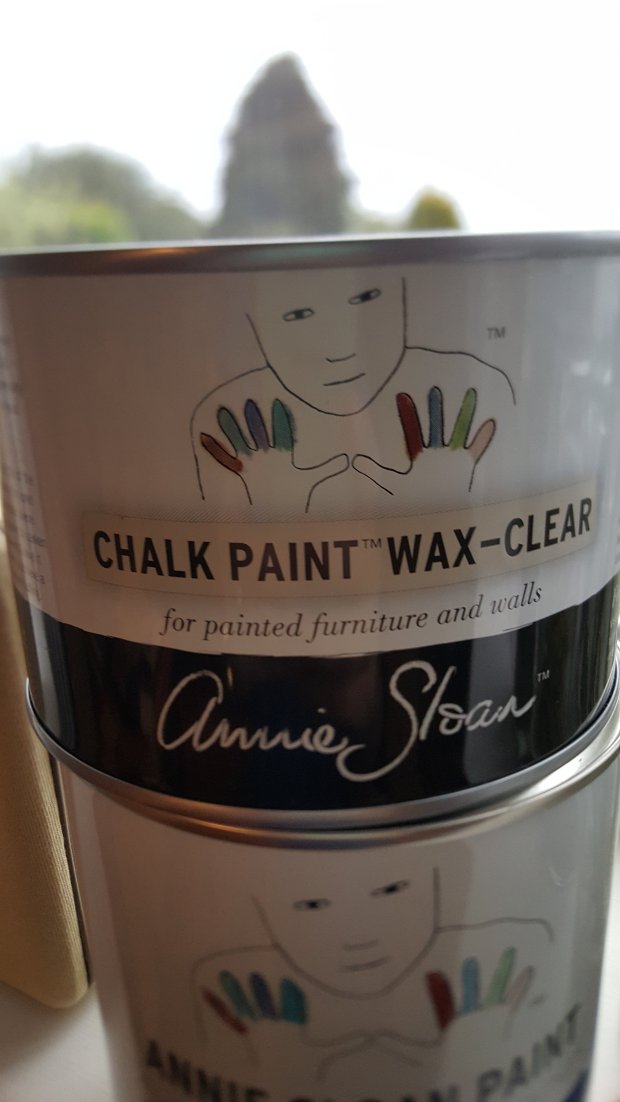 You can buy Annie Sloan chalk paint online at anniesloan.co.uk and the site also has a list of stockists so you can find one in your area. If you can’t find the right colour or shade, don’t forget you can mix them to create your own. Rustoleum also do a good range, some of which are available at B&Q.

My desk lamp is from Aldi & the pegboard from Ikea. 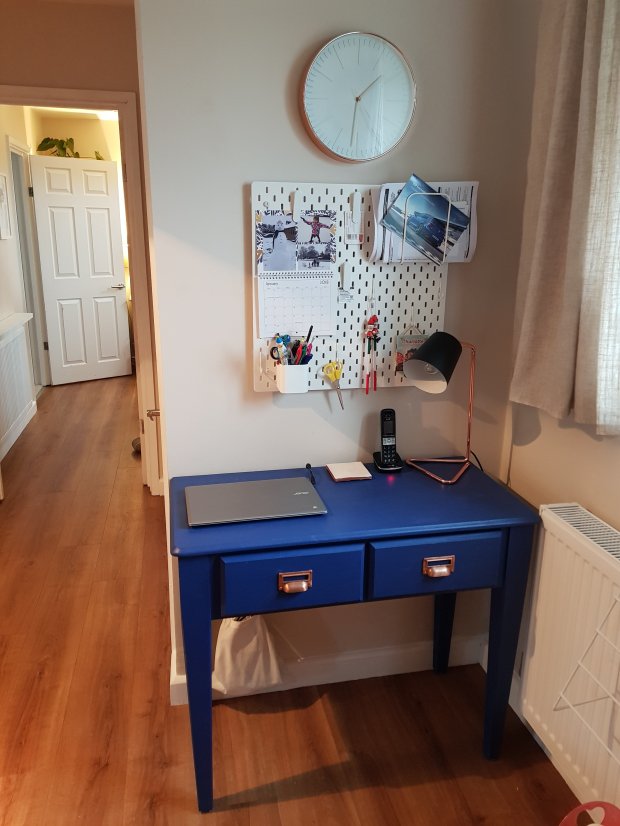 My finished desk in Napoleonic Blue

I spend hours of an evening scouring the internet for my next must have item for our home, and there are a few sites that I always return to. If you are looking for value, or current styles you can afford to change next year have a look at my favourite online retailers, these are the sites I recommend to my friends.

When we bought our new house we were lucky enough to be able to live with family while doing the renovations-it would have been impossible otherwise as we completely ripped it back to its bones.

Our first move was to ask an architect for some sketches so we could see how feasible our ideas were, then once we had a plan of action we set to work pulling the house apart. As the work involved removing walls & chimney breasts etc. we had to get building control involved. The project would need to be signed off at the end & we’d receive a certificate to show compliance with building regulations.

The main tasks were as follows:

Block up the second front door & create a downstairs toilet & utility in that space, move the boiler into there too.

At every stage we were obsessed with the costs. Constantly weighing up quality versus price. I spent countless evenings poring over bathroom fittings, flooring samples and curtains until even I was sick of looking at them-but we simply couldn’t afford, and didn’t want, to just throw money at it to make for an easy life.

We made a lot of compromises; the plastering is appalling-you definitely get what you pay for there-and since moving in we’ve paid the price for hiring a low budget plumber. I’ve spent many hours underneath our bath/shower/kitchen sink trying to address the leaks. We tried to relocate the boiler and not replace it but in the end we had to buy new, it seems it couldn’t cope with the move!

The master bedroom from the landing 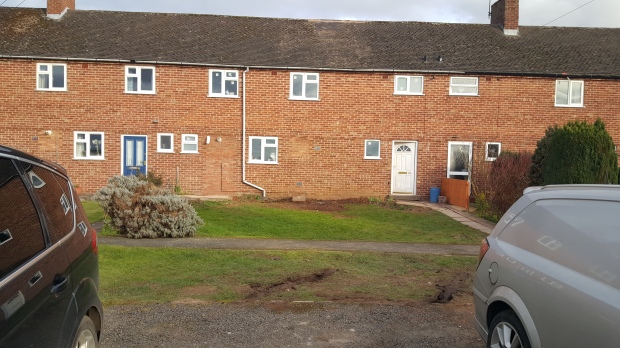 Chimney has been removed & the second front door bricked up

In order to save money, having sold our beautiful, fully renovated semi-detached house we downsized to this. A confusing building with two front doors and a strange ratio of bricks-to-windows.

At first I didn’t even consider looking at the property. From the estate agent’s photo I thought it was two flats, but it was my husband who saw what a bargain it was. It’s an ex local authority house so has generous rooms, is very solidly built & has a good sized garden front & back. It has a light filled landing with an outlook over open fields & as soon as we walked into the house we had a nice feeling about it. (I didn’t realise that was a real thing before-just assumed it was invented by estate agents on a hard sell, but now I know ‘that feeling’ does exist!)

I also loved the fact that the house sits near the end of a no-through-road, so is very quiet & I don’t need to worry about my children running in front of a speeding car.

However, the layout wasn’t right for us, the back garden was a mess & it had been a rental property for some time so really needed some tlc. It was also ugly. So, so ugly! This is where my own shoestring story began. In a few years I’d like to think we’ll trade up, but for now this is our home…& we’ve got our work cut out.

In 2015 my husband & I decided to take a departure from our ‘you only live once’ spendthrift ways & be sensible with our money. With two small children and an online business which sometimes struggled to earn us a comfortable living, we sold our first home near the town in order to buy a more affordable one in a nearby village.

“Of course it’s the right decision” I told myself, as I handed over the keys to our beautifully finished 3 bed semi, with its oak skirting boards, bay windows and granite worktops. We were putting so much less financial pressure on ourselves by moving & we wanted our children to grow up near fields and trees, not cars and shops. So many times though it didn’t feel like the right move, and the main reason for that was our choice of new house. You’ll soon see why…